Book a safe & personalised tour of the home and meet our caring and compassionate team. Call now to enquire.

The staff and residents at The Burlington care home in Shepperton, were delighted that their
home was rated overall Good and Outstanding in being Responsive by the Care Quality Commission,
following its first unannounced inspection on 3rd December 2019.

The report noted that The Burlington “had established a key role in the local community and was actively involved in building further links which had an extremely positive impact on people’s well-being.”
The feedback from residents, relatives, visitors and professionals was overwhelmingly positive.  A relative told the inspectors that their family member, “has not looked so well for three years”.  Other relatives’ quotes included in the report were, “The staff here are nice, very kind and always smiling”; “The biggest thing for us is that Mum  says she is happy here” and another said that their “Family member did not want to move into a care home but, once she was here, it appealed to her.”  Now she says, “I am lucky to be here’.”
The inspectors praised The Burlington for introducing “intergenerational initiatives, which provided opportunities for people to engage with others of different ages.  For example, the home hosted a children’s playgroup each week and children from local schools and youth drama groups had performed shows at the home.  Two students from a local school visited the home regularly to read to people.”
Residents, families and team members celebrated the achievement on the afternoon of
7th January where an official cake cutting ceremony took place and everyone raised their
glasses in a toast to celebrate the wonderful news.

Emma Dudhee, Home Manager at The Burlington, told the inspectors “The culture we have created is
not to do with hierarchy.  We are all here with one goal.”  The management team aimed to create a working environment in which staff at all levels supported each other to achieve good outcomes for people.
Staff told the inspectors they “received good support from their managers and senior colleagues.”
It has been a year since The Burlington first opened and the first CQC inspection result really is a milestone for the team to further develop in our journey to achieve outstanding across all domains. 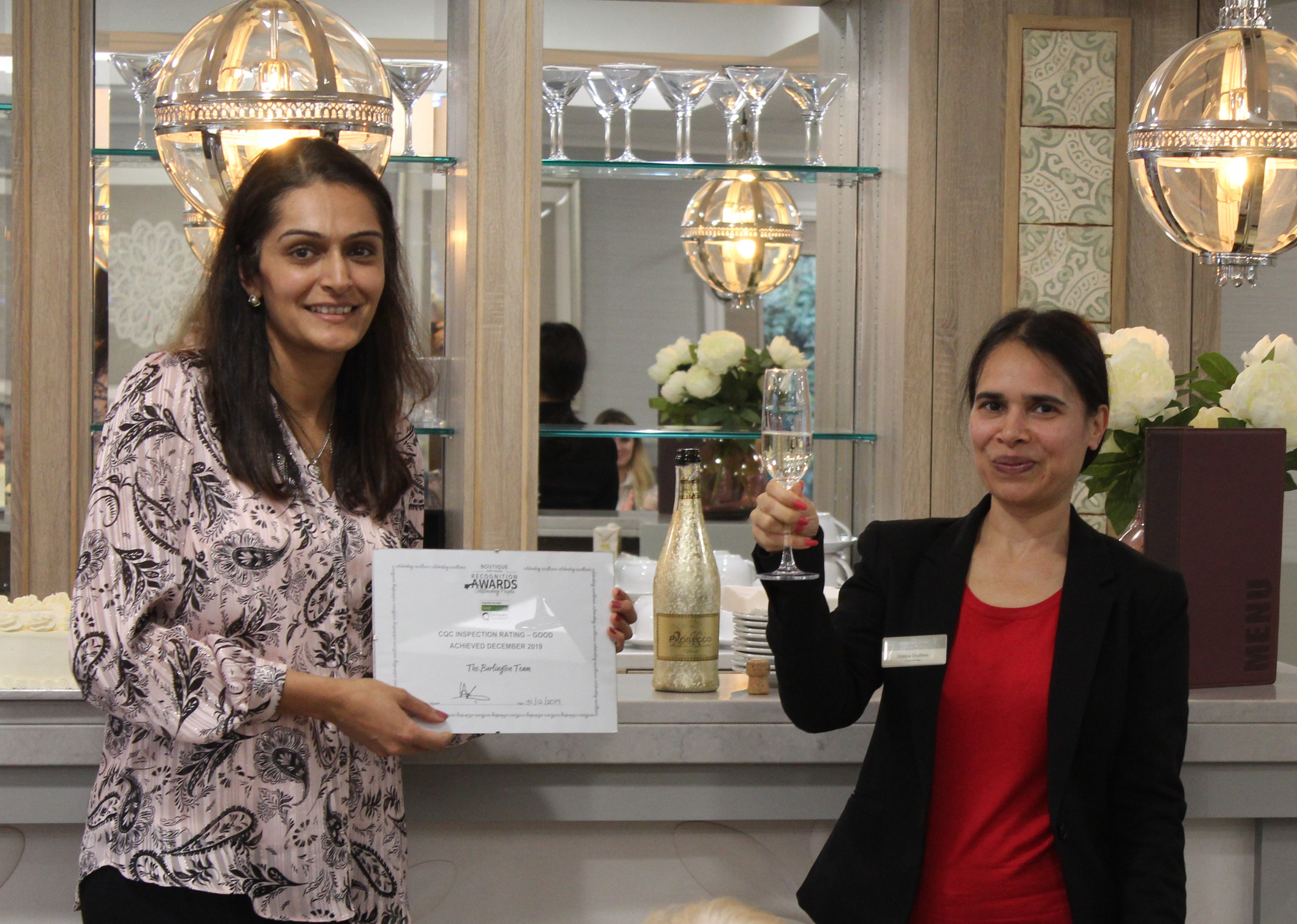 Safe in our Care

The safety and wellbeing of our residents, visitors and team members remain our priority. We are diligently and routinely following infection control measures in order to maintain safety and exceed basic requirements, evolving our procedures as required in order to ensure a safe and comfortable experience for all. We continue to follow PHE advice and enhanced infection control practices.

We are delighted to receive a complete clean bill of health and confirmation that The Burlington provides a SAFE environment and service. Whilst we knew we were doing all the right things to keep our residents, staff and visitors safe, it is always reassuring to have it confirmed by a CQC inspector.

We are now welcoming new residents and conducting safe, personal viewings of the home